The Age of the Roundal.

Barns, sheds, malt kilns and other buildings were still being converted for hop drying in the 19th Century, according to Lance. But by this time barn -style oasts with one or more kilns in the middle and a loading and cooling floor at either end are described as “the old method of drying”. The age of the round kiln had arrived. 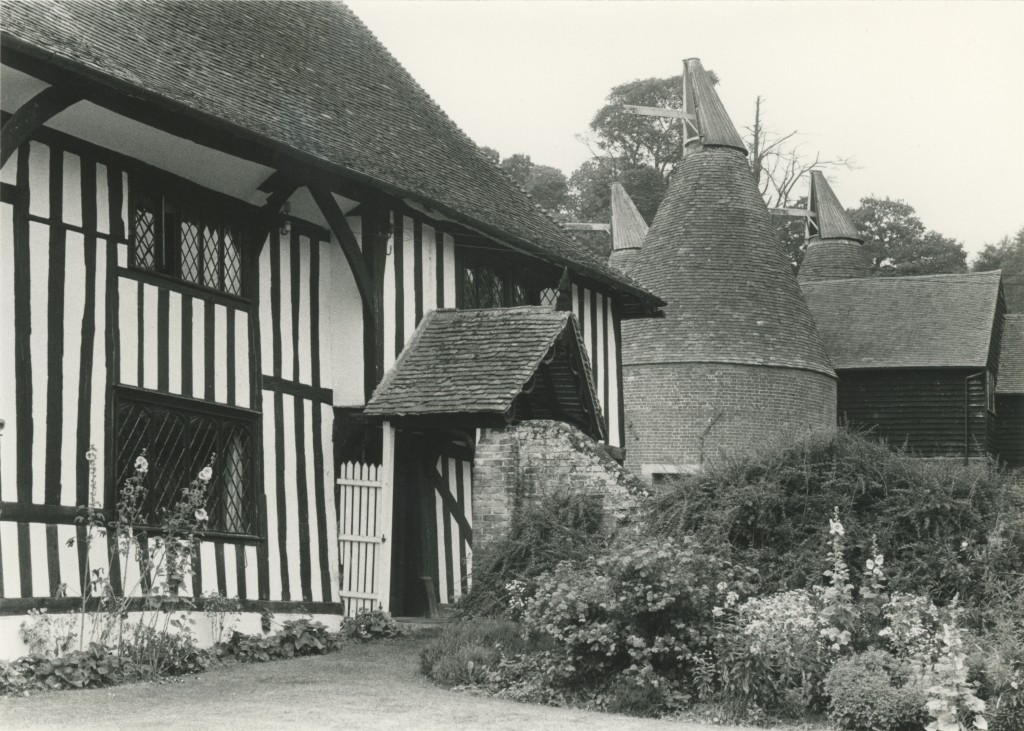 Roundals alongside a typical Wealden hall house. 1960 A Nelke photo

When and how the roundal evolved is uncertain. The barn style oast with the kiln inside the building had square or rectangular drying floors but in the roof some of them had a circular inverted funnel structure to draw the air up to the vent in the ridge of the roof. The makings of a round kiln were therefore in place as the round roof was gradually extended higher in order to draw more draught. Examples of of this evolution are at Budd’s Farm, Shibbourne, north of Tonbridge and Angley Farm near Cranbrook.

The next step was to make the drying floor round with round walls down to the ground. This necessarily meant building the kiln or kilns at the end or side of the stowage, rather than within it. There is no firm evidence of a fully formed roundal as early as 1800. In the early 19th Century it was widely accepted that the introduction of round kilns was the work of a John Read of Horsmonden in the High Weald (for example J C Loudon’s Encyclopedia of Cottage, Farm and Villa Architecture, 1846, and John Baxter Library of Agricultural and Horticultural Knowledge, 1834). An article in the Journal of the Royal Agricultural Society (Samuel Rutley, 1848, Vol 9) says that Mr J Read of Regent’s Circus, London invented the circular kiln and claims that double the quantity of hops can be dried compared to a square kiln of similar dimensions. John Read, who patented many medical and other inventions, applied knowledge he had gained from managing garden hothouses at Horsmonden in the High Weald to heating hop kilns. New types of furnaces which used circular hot water pipes to heat the kiln may also have stimulated the building of round kilns as the heating system fitted more neatly into a round space than a kiln with squared off walls. Nevertheless other evidence suggests that the roundal may have evolved before John Read claimed the credit. A small oast at Wye near Ashford , now part of the Brook Agricultural Museum has a roundal dated 1815, with four open brick furnaces. The fact that the magnificent oast at Sherlands Farm, Pluckley (see 19th C Eccentrics) was built in 1838 with 6 large roundals, suggests that the design was well established by the 1830s. 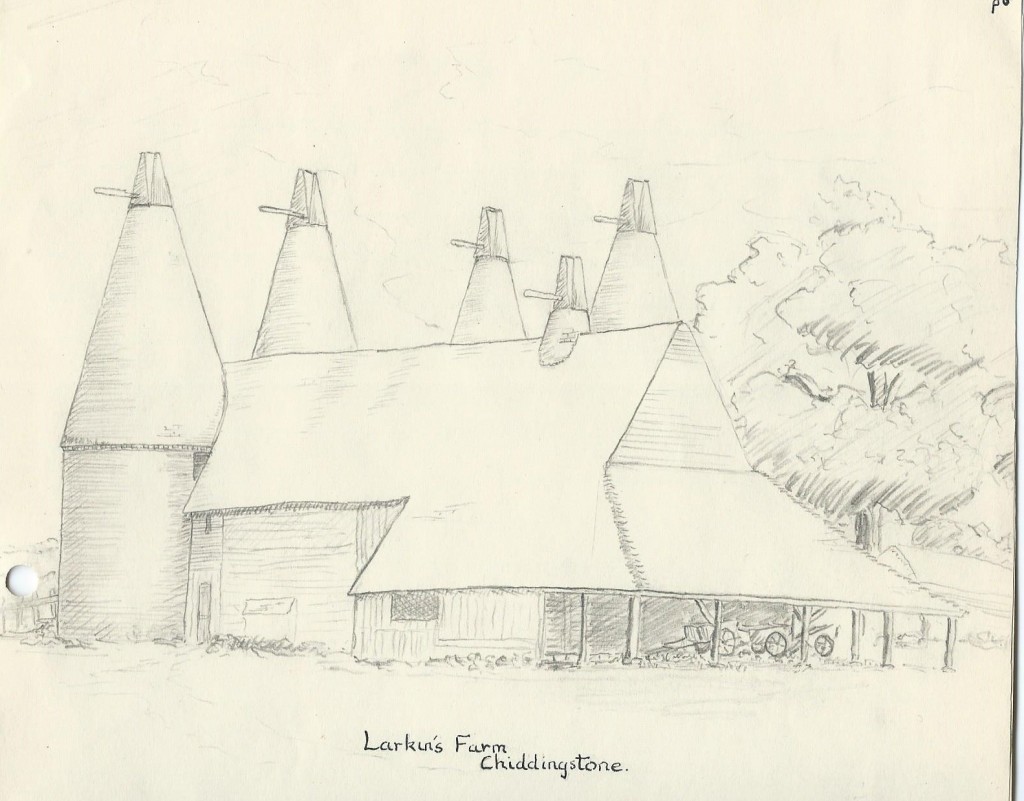 Many 19th Century roundals were added on to earlier buildings. At Larkins Farm, Chiddingstone, West Kent a “barn style” kiln then became the stowage for the four new kilns whose tall and thin design was good for drawing draught through the drying floor.

Lance is taken with this “improved method of drying by means of a circular oast house, a cockle furnace and damper cap cowl”. The round kiln dries quicker, avoids cold corners, allows more uniform circulation of air and an even spread of pipework below the drying floor as well as expulsion of all fumes. The sloping pyramidal roof reflects heat back onto the drying floor. The kiln should be about 20 feet in diameter. Every possible benefit is claimed by Samuel Rutley in his detailed account for the Royal Agricultural Society Journal: the drying floor could be 10 feet above the drying floor, the roof taller, the draught better. The round kilns used only half the amount of fuel. 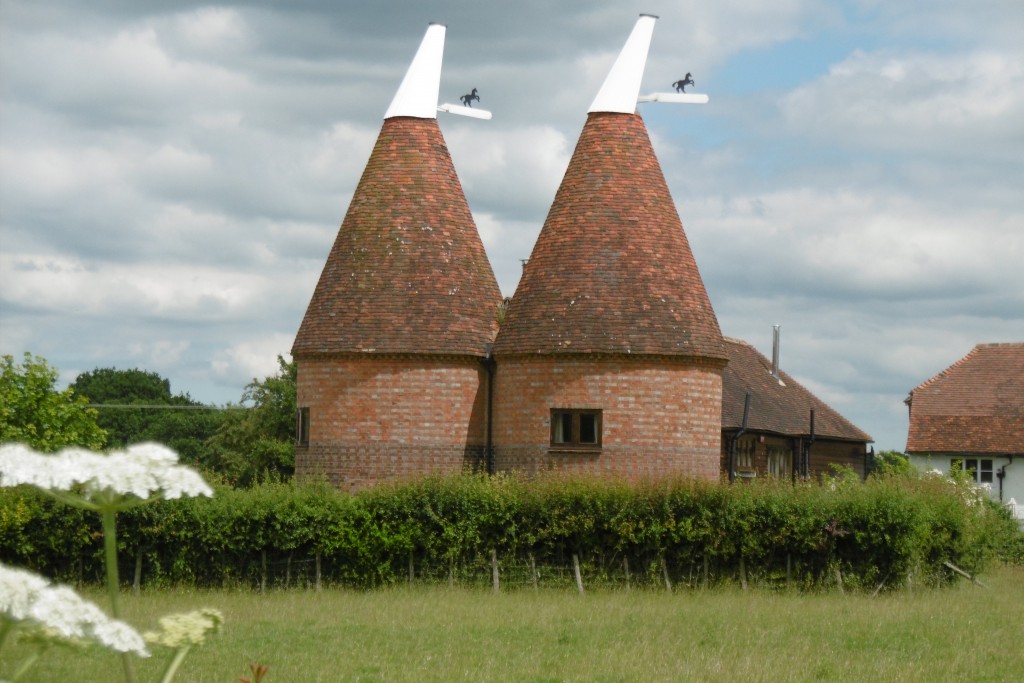 1000’s of round hop kilns were built in Kent and Sussex in the 19th Century. Surprisingly there do not seem to have been any off-the-shelf standardised designs. The experts suggested that the relative proportions of the kiln were important: for example, that the “shoulder” of the kiln (the eves) should be 1 1/2 times the diameter of the kiln (Whitehead RAS, Vol 81, 1870). But local builders seem to have done their own thing. Every variation of dimension, roof angle and lay out is found. Kiln roofs in slate or in tar came in. In one parish alone, Ewhurst’ East Sussex there were 9 oasts with roundals (Tithe Map of 1843). Oasts with roundals ranged from small and simple with one kiln to magnificent structures, for example the 8 kiln oast at Crowhurst Farm, East Peckham (Walton p89) built in 1884 and destroyed by fire in the 1960s

Use of sulphur continued as general practice. Lance, 1838 says that the dryers in Kent and Sussex used sulphur “without any sort of scruple” to fumigate their hops and turn them yellow, whereas dryers around Farnham used sulphur with great caution and achieved a better price for their hops. 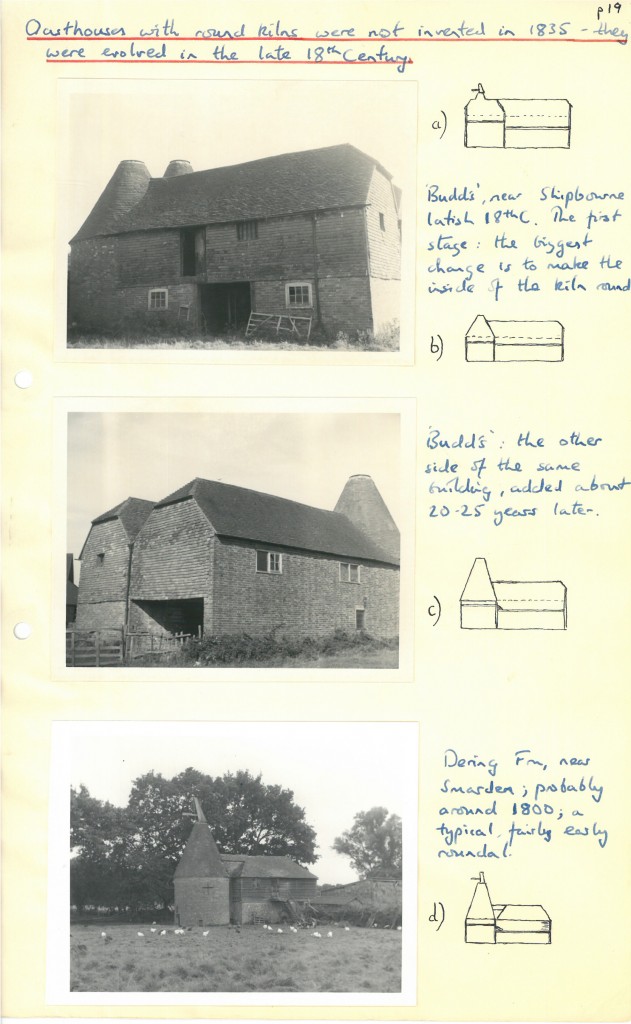 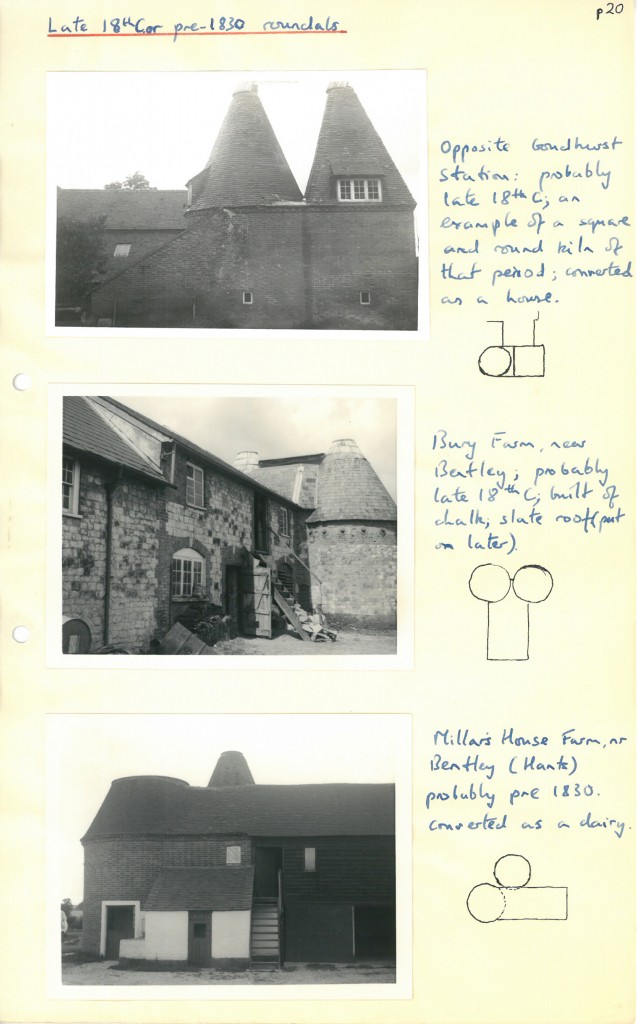 Littlebourne, east of Canterbury in 1960. Typical Kentish peg tiles and weather boarding on the stowage. Now converted to a dwelling. 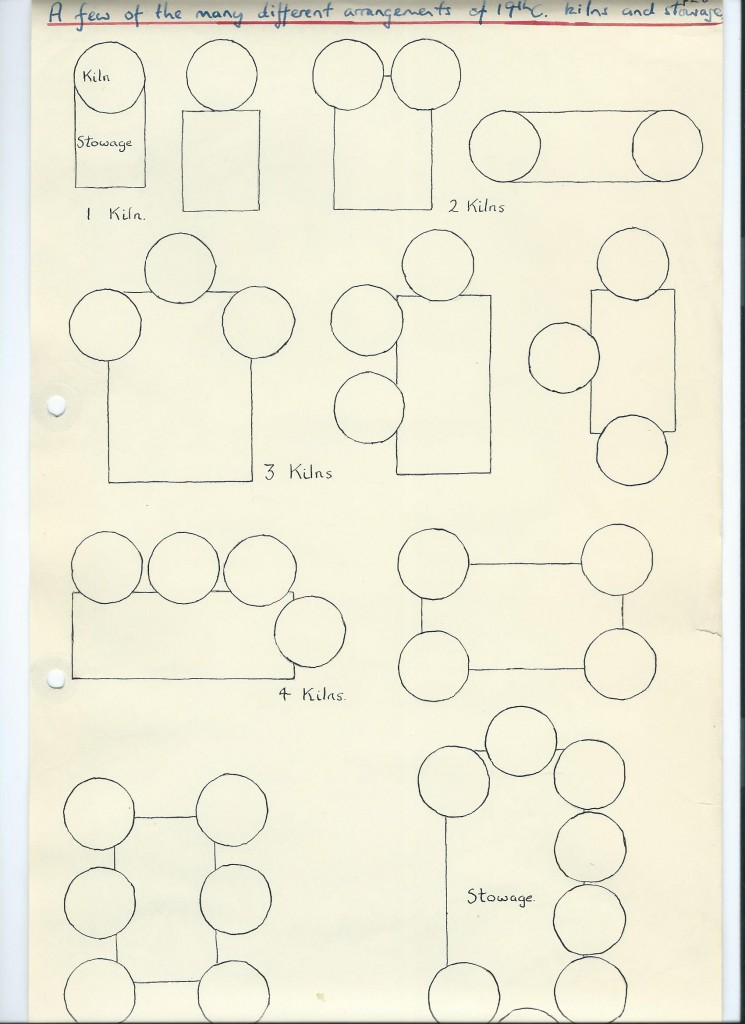 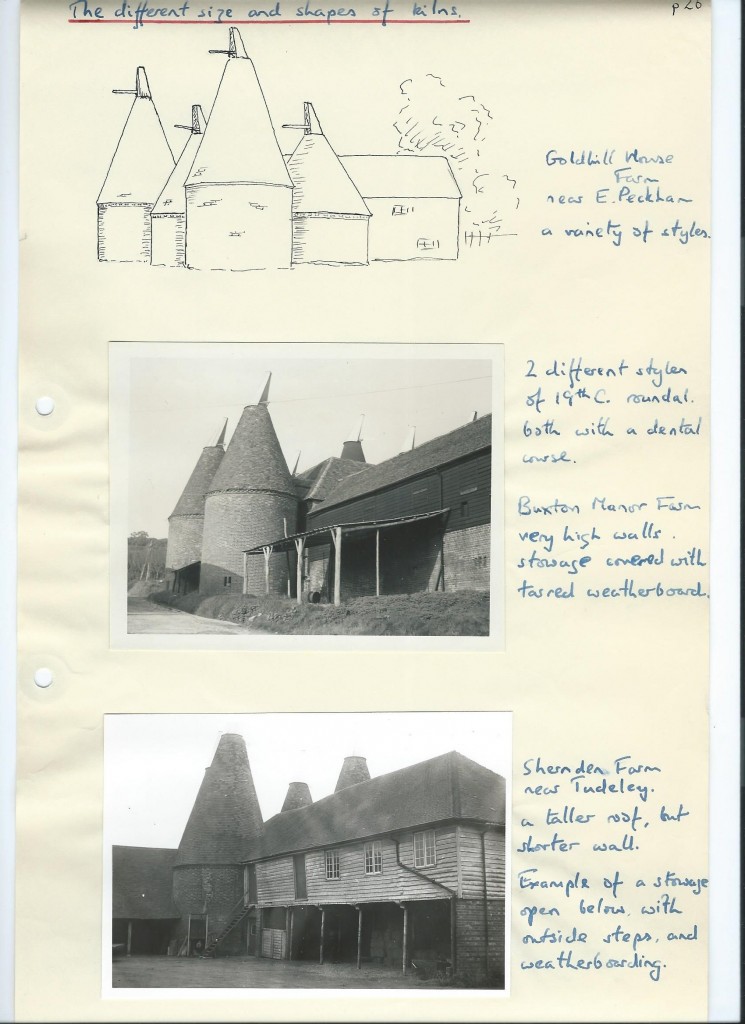 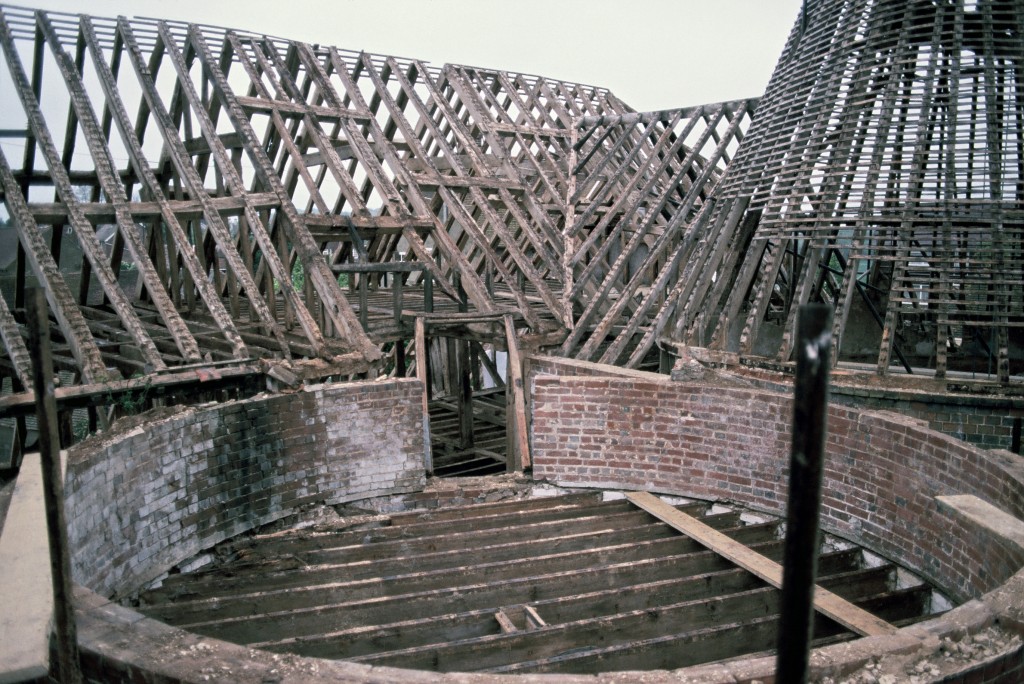 Boreham Street, near Hurstmonceaux, East Sussex . This 1990s photo by Gwen Jones during the oast’s conversion into a dwelling gives a good indication of the construction of round kilns with their drying floor and conical roo 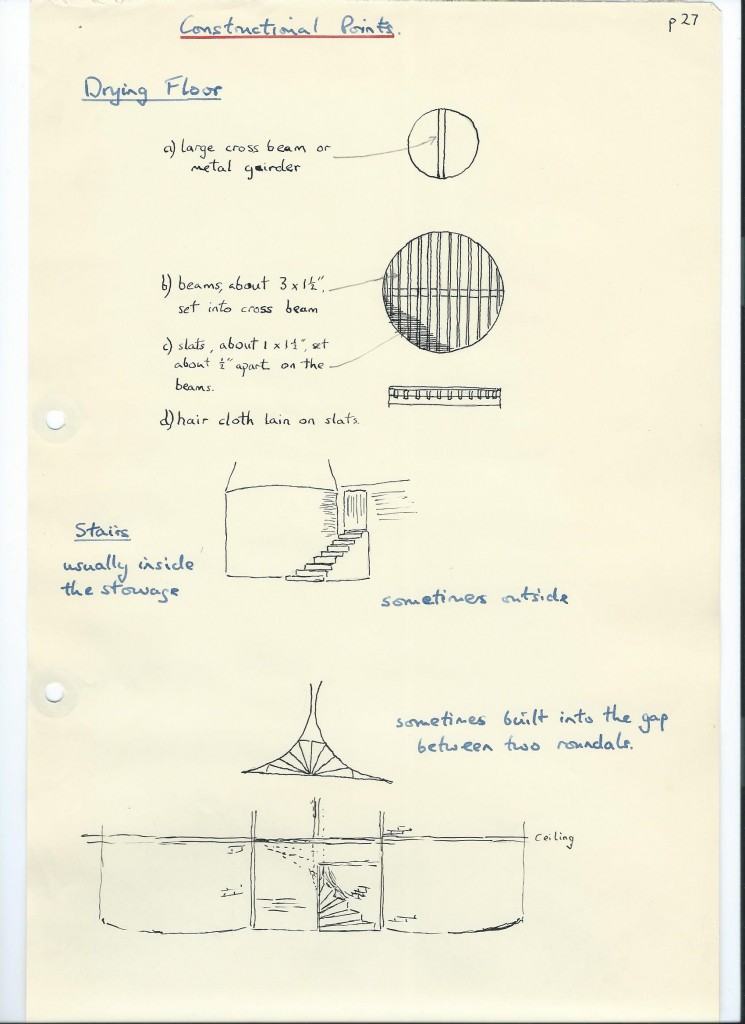 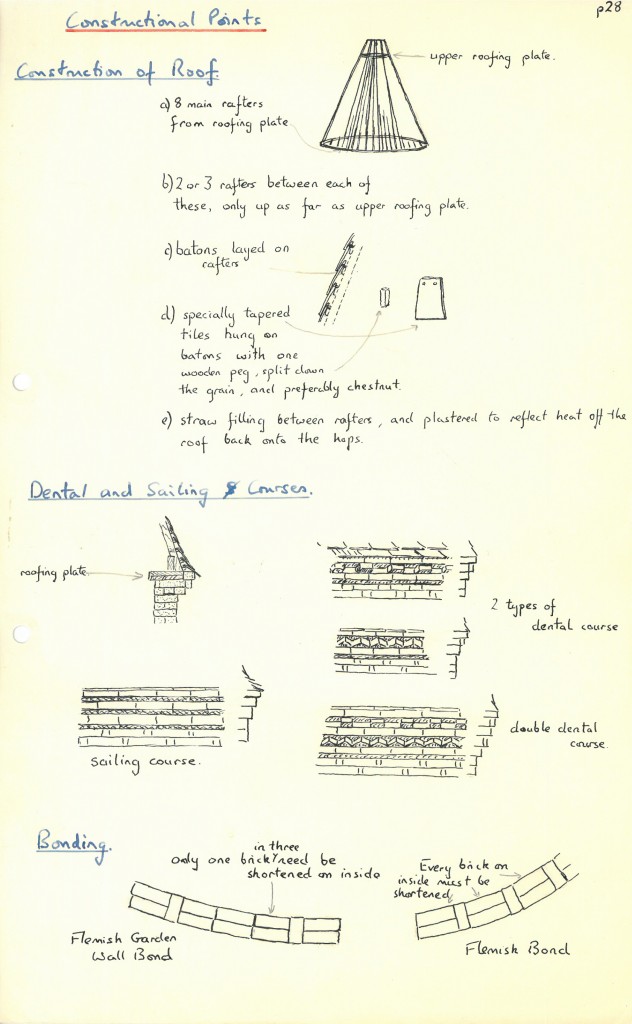 Brick was the most common material for building roundals in the 19th C, even though a Brick Tax remained in place until the middle of the century. Bricks are laid with either the long sides – stretchers – or the ends -headers- visible, making up a pattern (“bond”) which may vary from one line of bricks (“course”) to the next. Brick laying was not standardised and it does not appear that any one pattern was favoured for a rounded structure. The Flemish Bond ( 2-3 stretchers to every one header) was the most common. English Garden Wall Bond (all headers in one row followed by all stretchers in the next row) was also used. Hand made brick were eventually superceded by machine manufactured bricks. Infrequently the roofs of round kilns were built of brick, and then sometimes covered with tar. 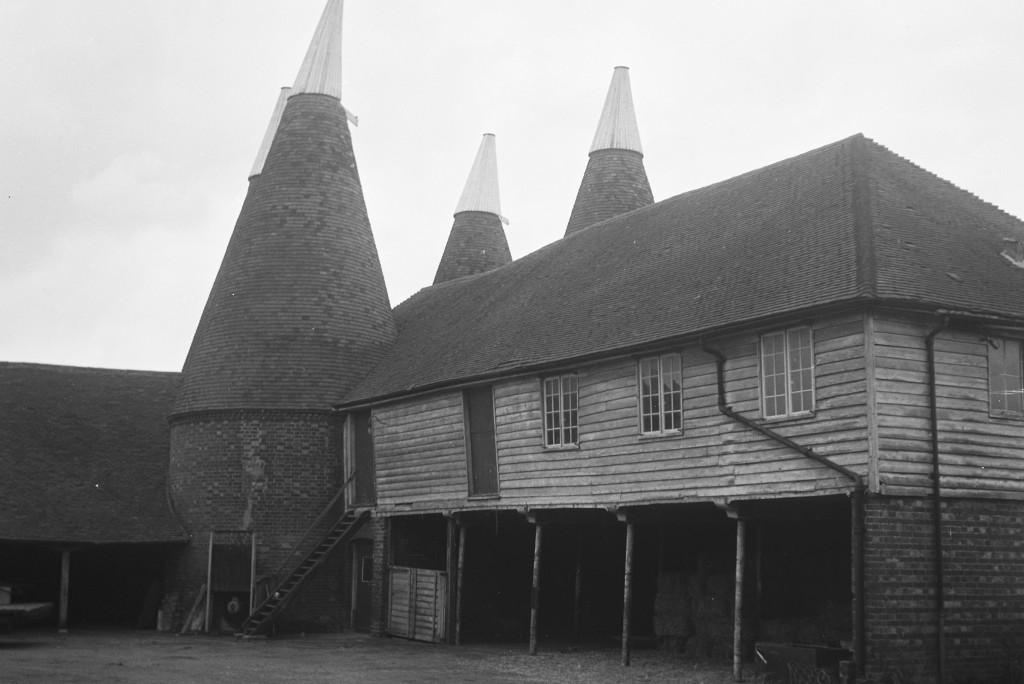 A typical Wealden oast with 4 roundals, open ground floor and external steps up to the loading and cooling floor. 1960 photo.

Various types of hard sandstone/greensaand rock, notably Ironstone and Ragstone, were used in Kent, Sussex and Hampshire and the West Midlands, bringing ochres, yellow and dark red colouring to hop kilns and oasts. Alternatively stone was used simply to create the edges for doors and windows (jambs) and corners of walls (quions), giving an attractive decorative effect. In the Weald of Kent and Sussex weatherboarding on the stowage was common, often giving the oast a deceptively old air.