The 16th CE. The earliest evidence

The first evidence of hop growing and drying comes from books and old records, not surviving buildings. Hops had been  used in brewing in northern Europe for centuries but hardly at all in England up until the 16th CE. Growing and drying hops was well established in Bohemia and parts of the Low Countries by the 11th Century.  (Brewing terminology is rather confusing: ale was made with malt but without hop flavouring – the forerunner of what we would call lager; the brew flavoured with hops was called beer, what we would now call bitter.)

Hop growing was well established in Flanders, notably at Poperinge, and it was from there that it spread to England. In England herbs and spices had been used to flavour ale and there was opposition to a foreign product, hops. Hopped beer (as opposed to ale) “makes a man fat as shown by the Dutchmen’s faces and bellies” (Dietary by Andrew Boorde, 1542). Henry VIII forbade the use of hops in brewing in an Act of 1530 which remained in force until repealed in 1552.

Various locations have been put forward for the site of the first serious hop growing in England. Westbere to the east of Canterbury and Broome, south of the city have been suggested. A well known ditty links the start of hop growing and drying  in England with the time of the Reformation: “Hops, Reformation, bays and beer, Came into England all in one year”  While the first sites were probably in Kent it seems likely that hop growing sprang up quickly across the country, including in the West Midlands, but stretching from North Wales to East Anglia, meeting demand from brewers who operated on a small, local basis at that time. For example, there is a reference to hops  near Bromyard on the Bishop of Hereford’s estates by the 1570s. 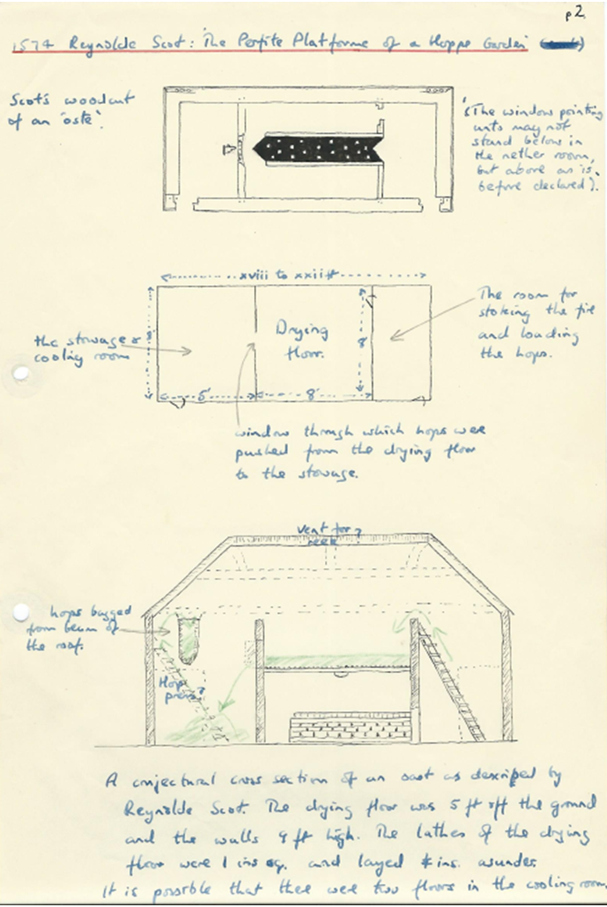 Enthusiasm for hop growing spread; it  was profitable and, after the initial opposition, Government changed tack and encouraged home production. Home grown hops substituted for imports and were even exported through Rye and Winchelsea: in 1524 a licence was granted to Sir Edward Guildford to export hops. There are documentary references to a Hoppehouse in Rye in 1585 and also at Salehurst on the  Kent/Sussex border in 1597 (Martin p125). William Harrison in his  Description of England, 1577 reports on the  recent rapid and profitable expansion of hop growing in England. In a short space of time hops went from being a hated foreign product to being an English product which must be protected from foreign alternatives. In 1603 1 Jas.1,ch.18 enacted  controls on imports to protect  English hops.  A strong streak of xenophobia runs through the Act: great frauds and deceits are practised by “foreigners, merchants, strangers and others in foreign parts in the false packing of foreign hops brought in from foreign parts, etc, etc”. Hop growers must have quickly organised into an effective political lobby group who overlooked the fact the domestic hop business was soon rife with similar deceits.

Thomas Tusser’s  Five Hundred Points of Good Husbandry written in verse in the mid 16th Century gave instruction on hop drying as part of his guidance for the month of August . He maintained that hop growing had been introduced in England in 1524. His book remained in print for  200 years. For the month of August Tusser included:

Some skilfully drieth thier hops on a kell (kiln)

And some on a soller (Attic), oft turning them well,

Where drying and lying in loft do despair.

In 1574 Reynolde Scot, a graduate of Oxford University and farmer from Smeeth near Ashford, Kent wrote a book called A Perfecte Playforme of a Hoppe Garden, a complete guide to growing and drying hops. Scot dedicated the book to Rt Worshipful William Lovelace, Sergeaunt at the Lawe who lived at Beddersden near by. He introduced it with extensive Biblical quotes about the wisdom of Solomon as applied to hops. He invited Master William  to “look down into the bowels of your grounds and seek about for a conveniemt plot to be applied to a hoppe garden”.

The book was reprinted several times in the following 70 years. This suggests that hop growing and drying was becoming well established in England.   If farmers did indeed follow his advice then his book is the best guide we have to what early hop growing and drying was like. But they didnt necessarily follow his advice.  Without an oste hoppes will never be well dryed, he said, pouring scorn on hop drying in attics or kitchens on earth floors or in the sun. Nevertheless purpose-built hop oasts were probably the exception rather than the rule for the next 100 years.

The illustrations of the Oste are based on Scott’s observations at Poperinge in Flanders. They show his ground floor plan and details of the brick furnace. They do not show the upper part of the building and my cross section is based on Scott’s description. The furnace and drying floor are built into the middle of the building, so that from outside it would have looked like a barn, not an oast as we know it now. The realisation that a better draught could be created by raising the roof of the kiln did not arrive for another 100 years or more. Cowls were not invented until much later and the smoke exited via a vent or cracks in the roof.

The structure described by Scott could readily have been constructed inside an existing farm building such as a small barn. This may happened in many cases. 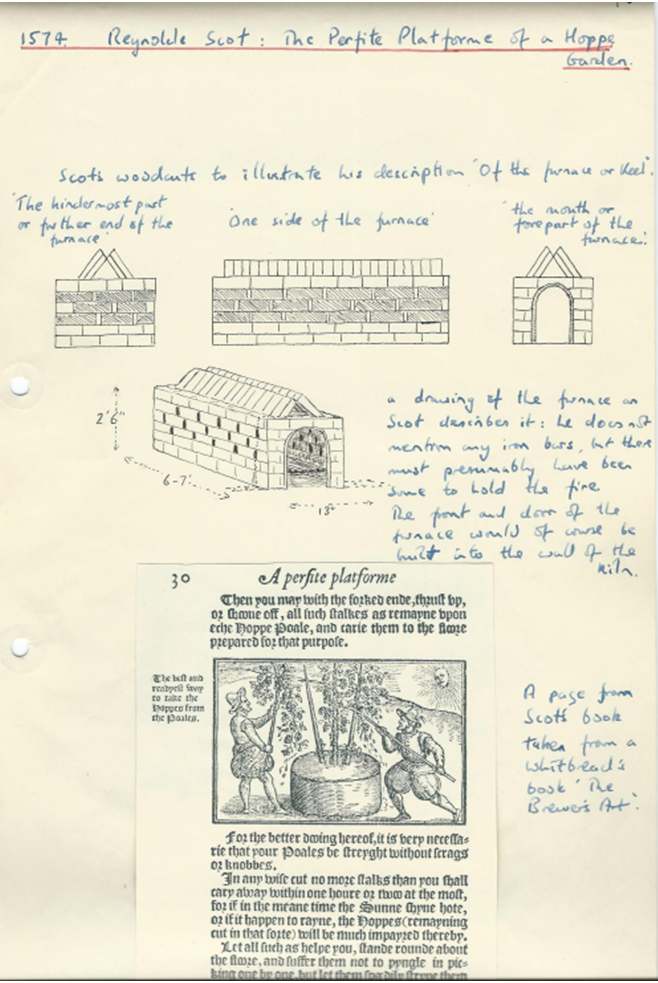 Scott’s model oast was miniature: less than 6 meters long and 2.5m wide. He instructs that the 8 foot square drying floor made with wooden laths should be 5 feet above the ground, so it would have been perilously close to the furnace. The whole building would have fitted inside a modern drying floor – though Scot comments that farmers with a large hop garden could build a larger oast with 10 foot square kiln.

The early oasts were built of timber, lathe and plaster so the fire hazard was very high. The main group of surviving buildings which convey a feel for what the earliest oasts were like are found in Hereford and Worcetershire and the centre of the Weald of Kent between Cranbrook and Tenterden and into East Sussex towards Hastings. The Weald had several advantages: a ready supply of hop poles from local chestnut coppices, and  well established charcoal manufacture for oast furnaces. Up to 100 sacks of charcoal could be needed to dry 1 ton of hops.

Some writers suggested that the earliest hop gardens and oasts were found in the Canterbury and Ashford area, further east.  There was extensive settlement of 16th CE religious refugees from the Low Countries in East Kent  and it is they  who would have led the way on hop growing in England.  Maybe traces of the earliest oasts await discovery in the buildings of East Kent. A counter view was taken by Daniel Defoe in his 1724 Tour of Great Britain (Letter 2 on Kent) who asserts around Maidstone “was the first place in England where hops were planted in any quantity, long before any were planted at Canterbury”