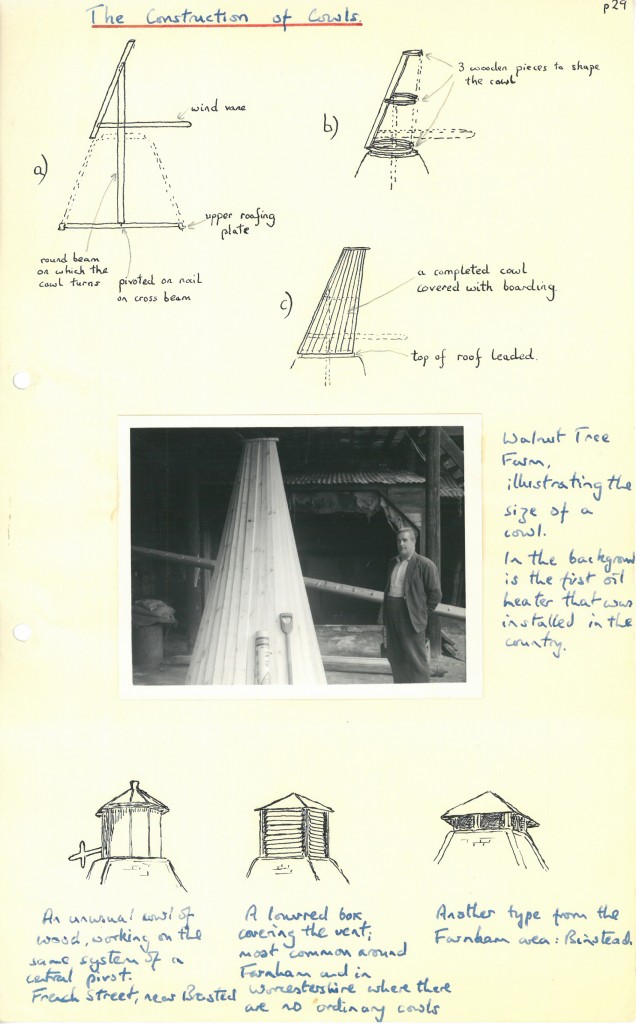 The cowl on the kiln is the most distinctive feature of oasts and hop kilns, yet little is known about its history. It is a skillfull invention for preventing rain entering the vent at the top of the kiln and for drawing the draught up through the drying floor. It spins on a central spindle and, with its long projecting vane, turns away from the wind and rain. In the days of kilns built within rectangular barn- style buildings the fumes, humidity and reek must have vented through holes in the roof, but there are no records of how this worked and how dryers prevented rain coming down onto the drying floor.

The general view is that cowls arrived in the late 18thC – early 19th C. A book by John Thorpe Customale Ruffense dating from 1782 has a drawing of an cowl on a converted church.By the 1839s when Lance was writing the cowl as we know it was evidently widely employed. His is keen to promote a recently patented alternative cap (Mr Perkins of Herts, 1827, Society of Arts Silver medal) The aim of this was to deal with weather conditions when it was wet but there was no wind to turn the cowl on its spindle away from the rain. A pulley system raises and lowers a cap on the cowl.

Sussex variant of cowl with side panels has been compared to a nuns headdress. Examples are at Leafwood Oast and Bells Yew Green near Frant. Generally cowls were painted white but at Chart Court Farm near Little Chart built in the 1850s the cowls were painted red and green to display the colours of the horse racing owner, Chester Beatty.

The classic revolving cowl of Kent and Sussex held sway in the 19thC and into the mid 20th C  Industrial, fan driven drying units do not need cowls, but cowl making lives on as a wood structure exposed to the elements  inevitably does not last for ever. 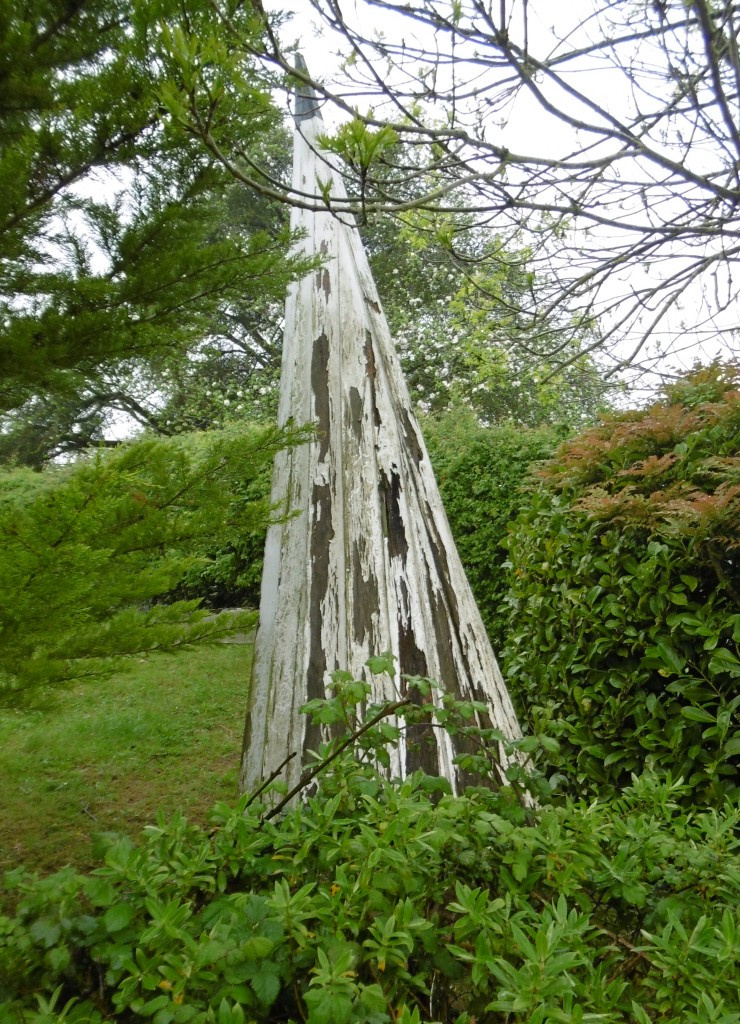 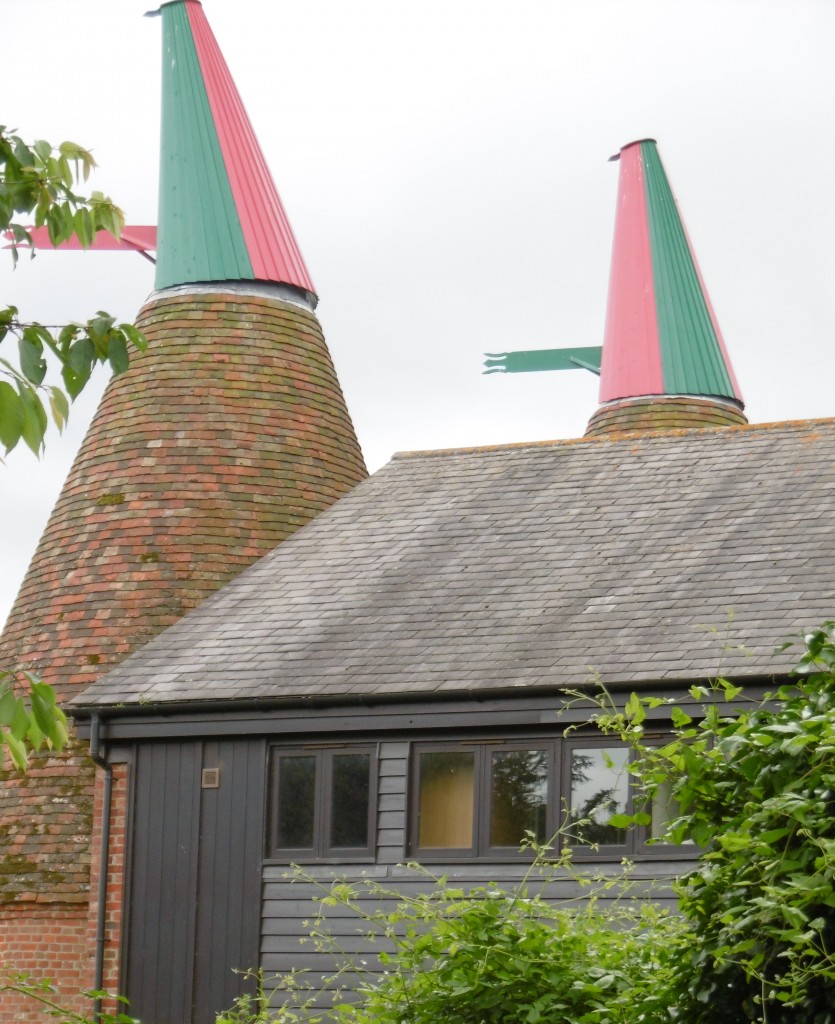 A rare sight – cowls painted in the racing colours of Chester Beatty at Chart, near Ashford 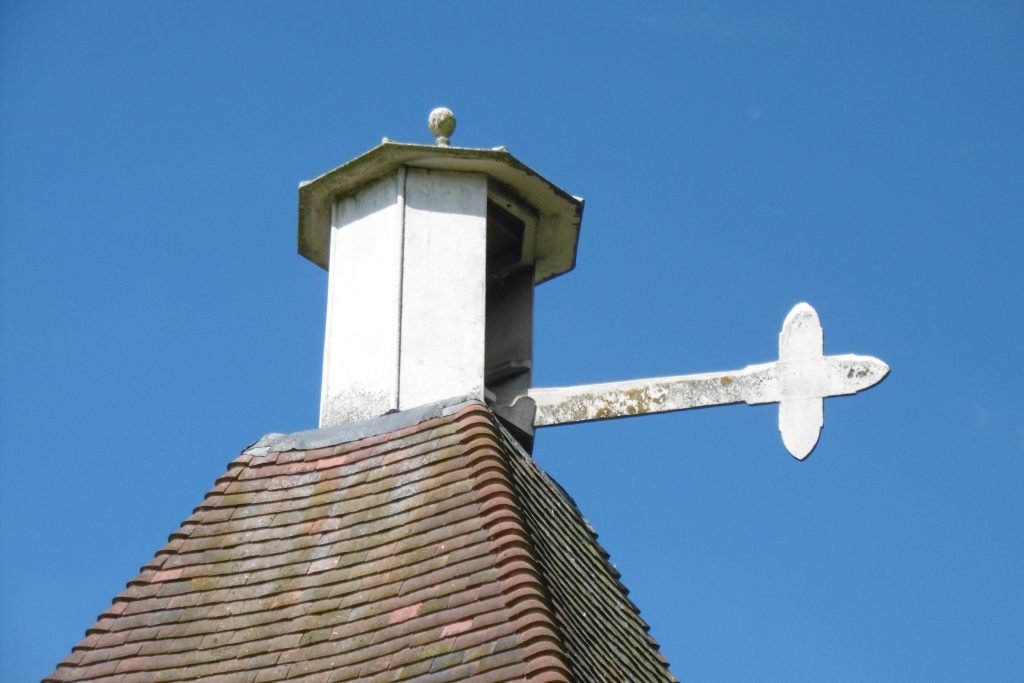 In Herefordshire and Hampshiure square louvred hats on kilns were more widespread, as shown in the illustrations above. And the elegant octagonal cowl at Outreach Farm, Brasted, West Kent appears to be unique. It is part of a striking 3 kiln , ragstone oast, built on a steep slope with open arches supporting the lower side. It is an outlying building of the National Trust’s Chartwell estate. It recently suffered a partial collapse of one wall but has been restored by the National Trust. 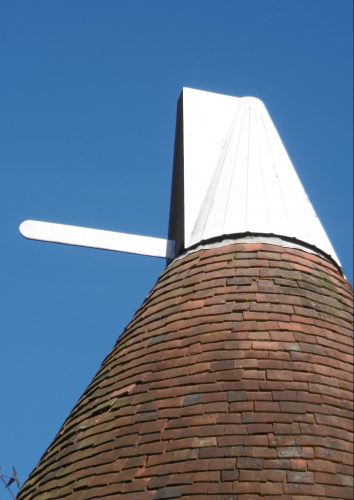 The “nuns cowl” style, most frequently found in East Sussex 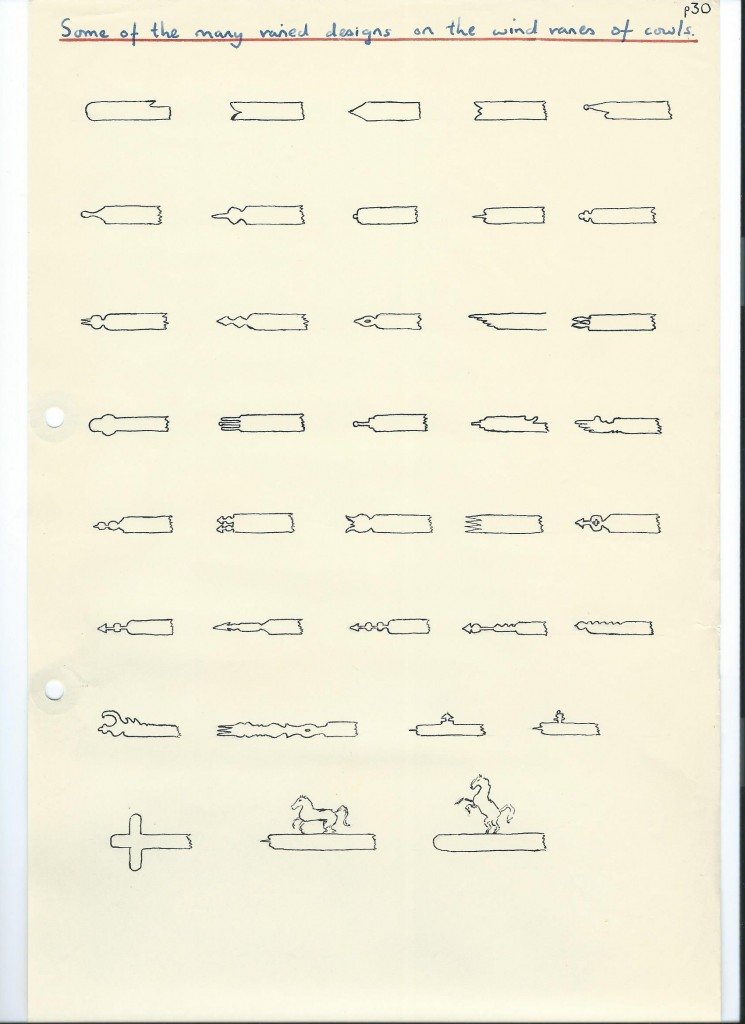 The diversity of carved wind vanes on cowls. The prancing White Horse, the last on the page, is popular. It is the county symbol of Kent with origins n Anglo Saxon times 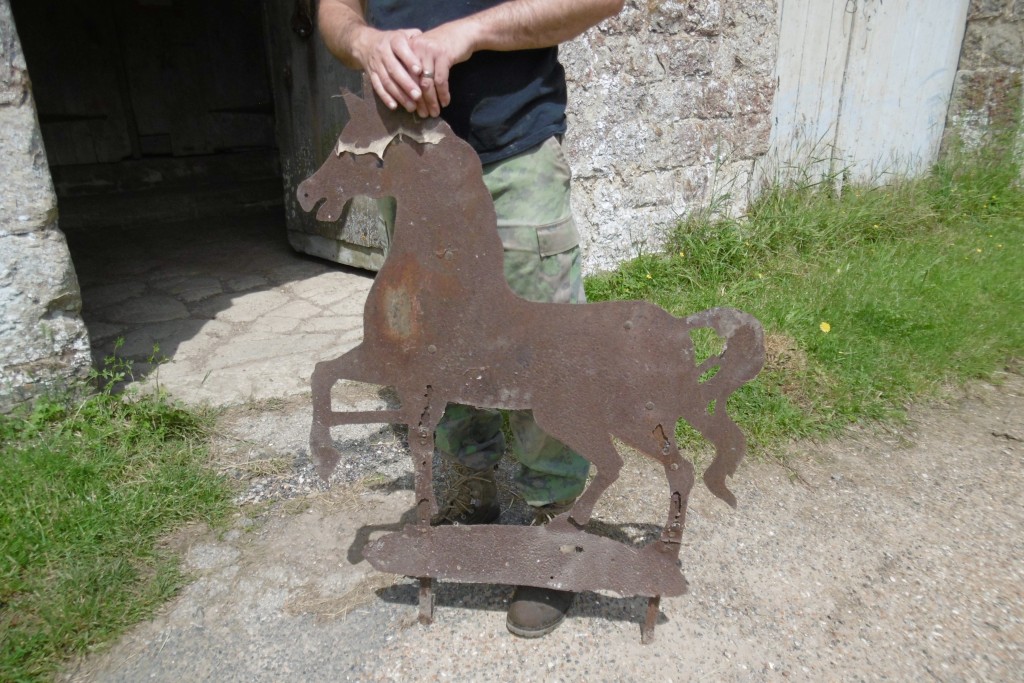 From ground level it is hard to realise the size of the wind vanes on cowls. A better idea is gained from this metal template of a Kentish horse used for making new cowls. Sheerland Farm, Pluckley

Cowl manufacture and maintenance survives as a specialist craft to serve kilns and oasts that have been convereted into dwellings. Fortunately new owners generally show  a strong commitment to  keeping cowls in trim, even though it obviously adds to house mainenance costs.  Dude and Arnette, based near Maidstone has been making and repairing cowls for 80 years (see Related Organisatiosn and Websites). Their pictures give an indication of what is invoveed in maintaining one’s cowls. 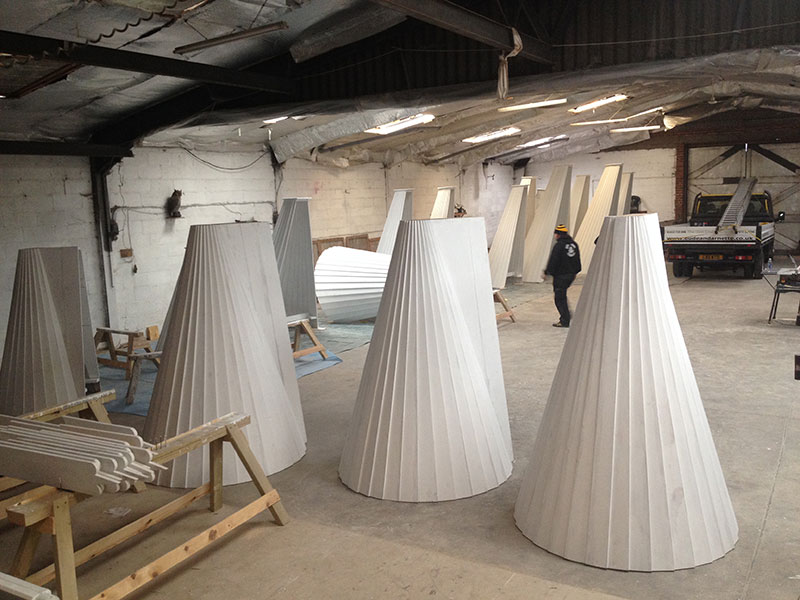 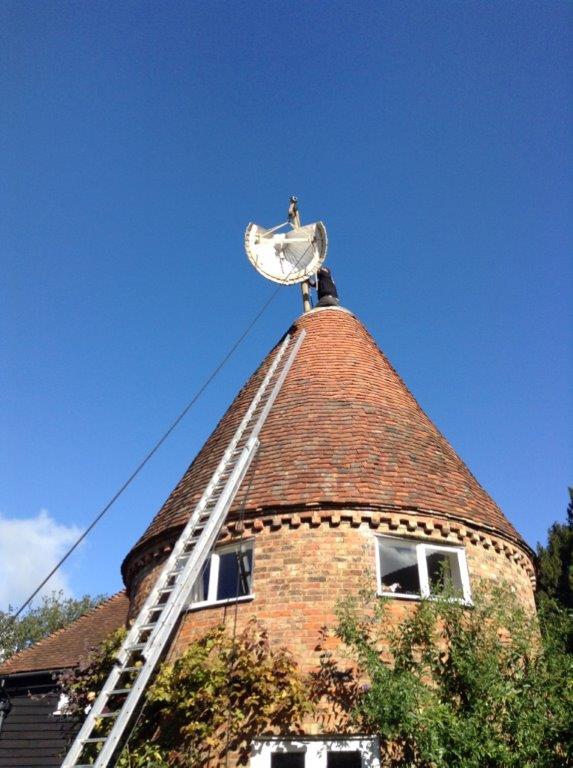